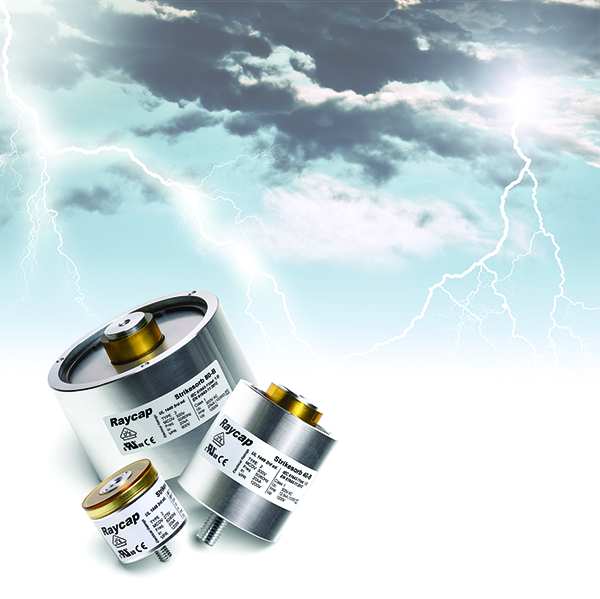 Across many business genres, one aspect will remain constant and continual, the need to protect critical components and equipment from damage.  In all business types, one of the major impacts to profitability is the necessity to replace or repair the equipment that makes the functionality happen.  While these components will vary from industry to industry, as will the costs associated with keeping them online, the ability to keep them functioning for longer than is predicted will benefit the bottom line.  In a nutshell, if it is predicted and expected that a business will need to replace a certain piece of capital equipment within a certain timeframe, and that equipment lasts longer than that timeframe, then the business is more profitable.  Because one of the major causes of damage to computerized and electronic components within modern industrial frameworks is lightning strike and surge damage, the utilization of robust surge protective devices (SPDs) is necessary.

Raycap is a world leader in the development and manufacture of technologically advanced industrial surge protection devices.  Our products are being used globally within a wide range of industries to perform a simple task, prevent the overflow of electricity through power lines from reaching easily damaged electronics equipment.  The regulation of that flow of electricity 24 hours per day, keeping it within a specified safety range, is the only way to minimize the damage that is produced when lightning strikes the equipment, structures or attached elements within an industrial site.  Due to the exposed nature of these placements along with the use of materials and setups which are natural attractants for lightning strikes, the task is quite difficult.  In the past, SPDs that were simply larger versions of residential surge protection devices were the only technologies available to perform this mission-crucial task, however as equipment cost increased so did the necessity of taking protection seriously.

Raycap engineers have spent decades improving the technologies that prevents electrical surges from moving past the installation point of a SPD device.  In addition to the actual functionality of the surge protection devices themselves, engineers have concentrated on improving the ability of the device to continue functioning after it has performed its task.  Competing devices may be constructed of some of the same robust materials as Raycap devices, but none have the ability to remain functional without reset or replacement after a lightning strike incident.  Most utilize systems where they will need to be “replugged” or have a breaker component reset in order to restore electrical flow.  Raycap’s Strikesorb devices do not need to be reset after an overflow has been prevented, thus keeping functionality intact during the occurrence of multiple strikes or surges, as well as other events.  There is no break in the protection functionality of Strikesorb devices, meaning there is no pauses or gaps where your critical equipment is unprotected.  Raycap is the logical choice for industries that not only want, but need to extend component lifespans in order to maximize profits.  Contact our representatives today to find out more.